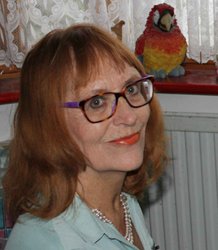 My surname should have been Redhead, but my grandfather changed it to Read, probably because, like my dad and me, he had red hair and was fed up with the jokes

I was born in South Liverpool, close enough to the River Mersey to be able to hear the wails of ships’ sirens on New Year’s Eve. When I was three, I started playing the piano by ear. I wrote my first song and my first poem when I was six, and started my first book at eleven, which I never finished and just as well, too, as it featured the most unlikely Canadian lumberjack hero.

After university  - I studied English Literature at UCNW Bangor - my heart was set on working in journalism or publishing, so I came to London, where I enjoyed ten of the best years of my life as a rock music journalist, one of the highlights being lunch with Marc Bolan! This was followed by ten more brilliant years as fiction editor, then editor, of Loving magazine, a romantic story magazine

I have had scores of short stories published in women’s magazines, but the oddest thing I was ever commissioned to write was a story for a children’s television programme, entitled Willy the Mountaineering Worm! My published books include Love Cheat and Lavender Blue (Scholastic Point Romance), City Sax (Virago Upstarts) and The Lies They Tell (Andre Deutsch).

My interests include reading (I have been known to bump into people and lamp-posts whilst ‘Kindle-walking’), nature photography, cats, playing the piano, writing songs and poems, slobbing out on sun-kissed beaches and inventing odd concoctions in the kitchen.